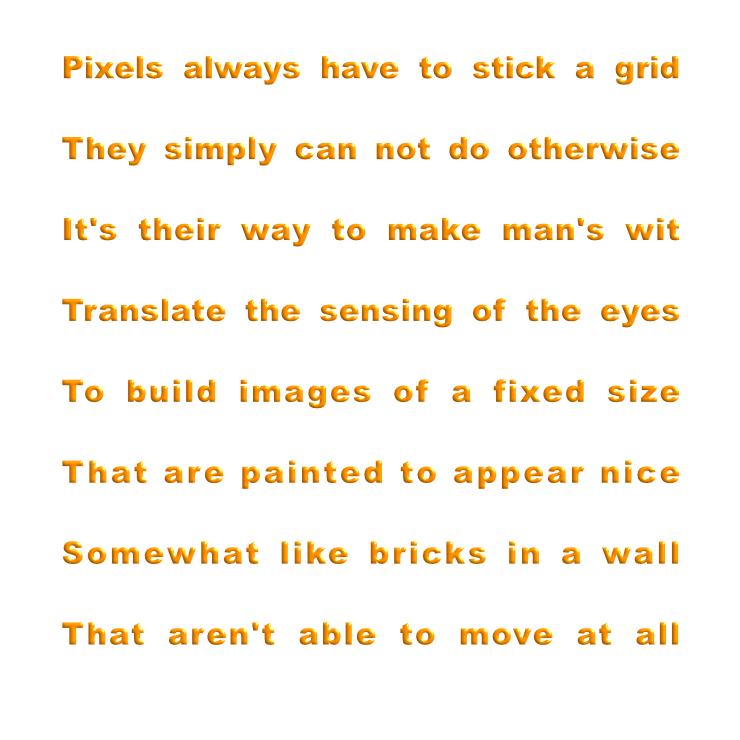 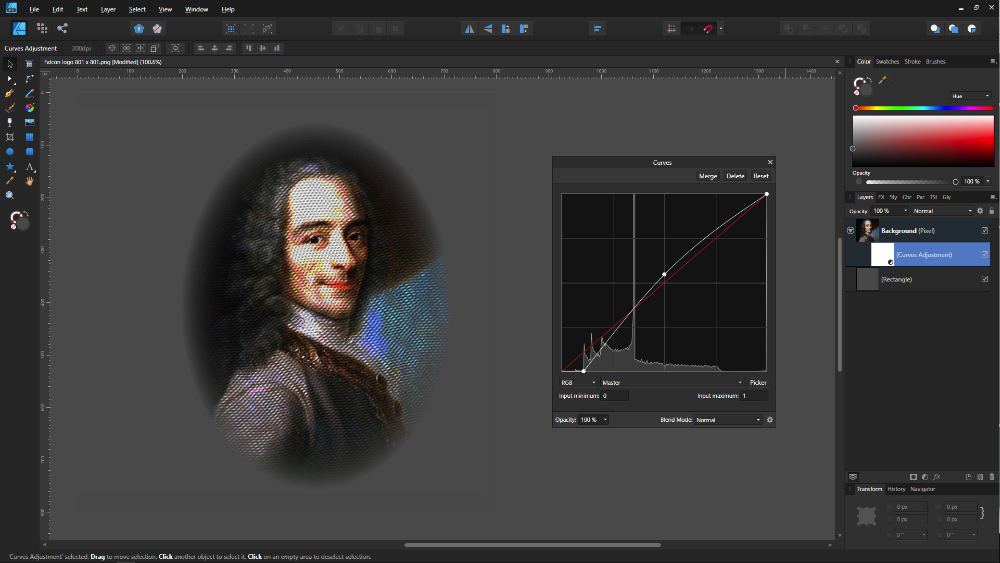 Below is a selection of my bitmap portfolio. With Affinity Photo it is possible to do much more than just editing bitmap images. All portraits and paintings were created from scratch. Update sequences and information on my projects can be seen in my portfolio blog. Click the images and links (in red type)  below to see their stages of creation. Note: Click on images below to see them in a Lightbox on black background for a better viewing experience. Click again or turn the scroll wheel on the mouse to return to the page. This only works on desktop PC's. On mobile devices press the back button to return to the page or swipe up or down.

AP is a well known and successful Hollywood movie actor. It's a known fact that matters related to celebrities draw hits, but I think in the near future I will move away from that, because all too often there appears to be a dark side to these persons that most common people refuse to believe, because it does not fit the image in their comfort zone that has been imposed upon them. Needless to say their dark side is not something I identify with, quite the opposite. 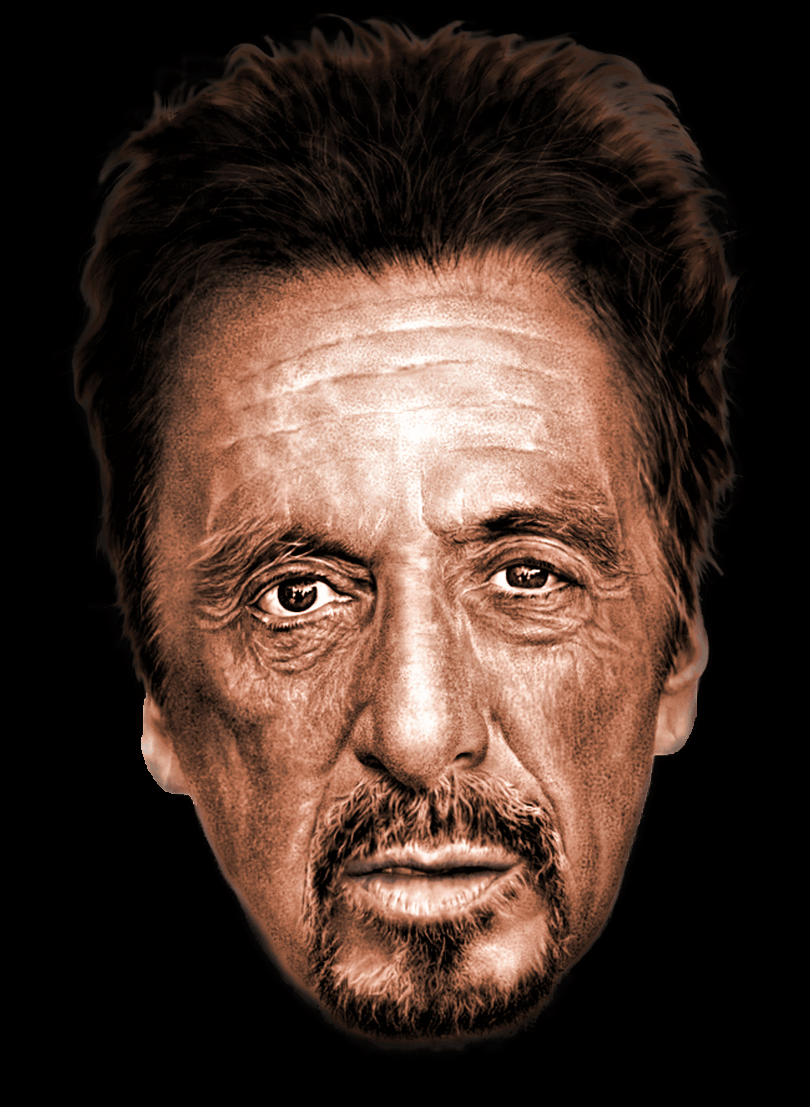 WN is a famous country singer and guitar player who also played in several movies. When over 80 years old he won a 5th degree black belt in a Korean martial art (Gong Kwon Yu Sul). Maybe the use of pot also contributed to his good health. He has lived an off-standard life as a private person and musician, having an outstanding record in both capacities. It is what makes him an interesting person, which has gained him a rather large number of followers.

HK is a founding member of the No Surrender MC and was later incarcerated by the corrupt Dutch government, because the government is afraid for well organized large groups of people. HK, who has no criminal record, therefore is a political prisoner in the would be Dutch democracy

I started this portrait in GIMP, but later
switched to Affinity Photo. MT is one of the best writers history has known and wrote books that profoundly challenge imagination and persuade his readers to cast off limiting conditioning in a most eloquent way. His elevated knowledge and consciousness hint at the fact that he wasn't just an ordinary member of society, but one who was privileged to have access to information unavailable to those forced to live in induced comfort zone rubble. Those that aren't, know what this means. 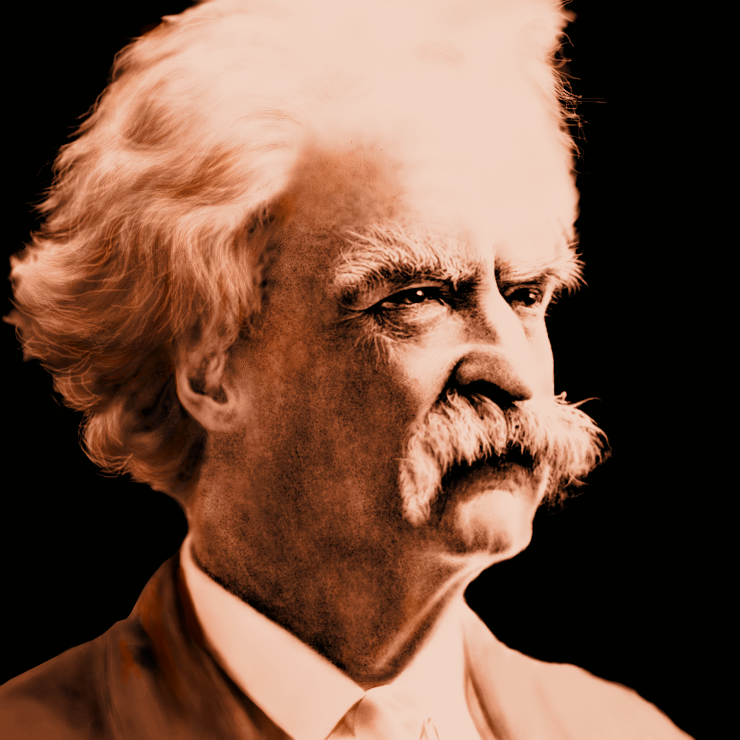 Four years after I sprayed this portrait with an Iwata HP-BH airbrush gun and Inspire H2O paint on paper, I digitally reworked it in Affinity Photo. Bukowski had an elusive mind, resulting from the demanding life he was cast into on this planet, that drove him to write hard hitting, strange books, thereby gaining a considerable following of people who probably had related strange aspects to their personality and life as well. Bukowski never made an effort to hide his weirdness and enjoyed cultivating it.

RW, co-founder of Pink Floyd. Started out as a pencil drawing on crappy office copy paper, after which I applied some accents with an analog airbrush, Iwata HP-BH and Inspire H2O paint and years later I digitally edited the image in Affinity Photo. RW is outspoken and often is accused of anti-Semitism, but he merely is committed to standing up for the case of the Palestinian people that are direly oppressed

This portrait of BP I sprayed years ago with an analog airbrush (with airbrush gun, compressor and paint on paper). Later I edited it in Affinity Designer and Photo. After having been in an ugly divorce circus with his ex Angelina Jolie, Pitt now hooked up with a woman less than half his age (Nicole Poturalski). It hints at the fact that adoring celebrities is mental and an utter waste of time.

Besides bonkers celebrities, there are some with substance, among whom is Bob Marley, who transformed Reggae music and elevated it on the world stage to an unprecedented level. BM had something to say and draped his message inside appealing musical interpretings.

This airbrush portrait I made for late great Henk Bensdorp, who was a product manager at Van Beek Art Supplies in Badhoevedorp. He introduced me into the world of airbrush by giving hints and all sorts of equipment that allowed me to get going. The reference picture was a stamp sized photo in a television program guide. Decades after spraying the portrait I did some minimal digital editing to it in Affinity Photo.

This work started out as an (analog) airbrush, that I later edited in Affinity Photo. After spending a long time in correctional facilities, DT had a successful career in the movie business and started to run a restaurant and helps youngster to stay off the criminal path.

Two centuries ago American photographer Gertrude Kasebier visited Indian reservations to photograph Native Americans in their imposed confinement to at least record some of the history that the British and American armed forces tried to wipe from the face of the earth. The reference photo of this young Lakota warrior was a black and white image, since colour photography did not yet exist in those days. His name refers to his sinister skills.

SB is a social activist who relentlessly fights against injustice and government corruption. He also exposes criminals that work with the corrupt government behind the veil. Although that is not a safe thing to do, he is unstoppable. Of course because of his activities he is falsely represented in the utterly corrupt Dutch mainstream media. His profound knowledge of the criminal world, which includes the political organized crime scene, business and even higher echelons, makes it difficult to refute his claims. He therefore is a danger to the system.

Chief Plenty Coups played a dubious role in shaping the destiny of the Native American nations as a whole by cooperating with the US army, but in doing so saved his people, the Crow nation, from the tragic fate of the Sioux. It probably was a decision he made (or felt forced to make) out of which he must have known no good was going to come. I freehand airbrushed his portrait decades ago and long after edited it in Affinity Photo, because I was intrigued by his facial features, that reflect a life that was flooded by tremendously conflicting feelings.

For this portrait, based on a painting by Howard Terpning, I tried a more loose and rough style to better bring out the warrior's character. I used an old generation of the Huion H610 Pro drawing tablet to digitally paint this man from scratch, which is an excellent tool to create this type of digital paintings.

Inspired by an other work of Howard Terpning. The First Nation warriors facial traits are beautifully captured in a stunning painting style, while the palette is awesome. Terpning is the modern day heir of the great masters of the past. I consider these interpretations to be a digital tribute to his work.

Inspired by an other master piece of Howard Terpning. The deceivingly simple scene makes this painted observation very powerful. Terpning has that rare, investigative artist's eye and empathic talent that allow his outlandish artistic skill to excell. The touch of his brush, choice of palette, feel for composition and knowledge of paints match those of the revered masters of old.

This work was originally airbrushed on T-shirt and later edited in Affinity Photo. The (analog) airbrush was sprayed on a fair in Utrecht (The Netherlands) while performing a demonstration for the Revel company that wanted to promote the Vega 1000 airbrush and a number of their paints.

This analog portrait was a rush job that I sprayed in 8 hours overnight after receiving a new airbrush that I was asked to test -  the superb Fischer Aerostar airbrush for Letraset's Dutch branche for its introduction in The Netherlands. The airbrush gun was built from exotic materials like titanium and as a result was very expensive, which is why it never sold well, but its handling was outlandishly good. The paint almost still was wet when displayed on the show. The man in the painting is super hobby crafsman named Albert Stannard, who built tiny foldable ships in tiny lamps.

This freehand airbrush was sprayed with a Harder & Steenbeck Evolution airbrush gun and Illu-Color paint on canvas. Decades later I edited the painting in Affinity Photo. Hazes was a Dutch balad singer with a beautiful voice, who had some tragic aspects to his life and passed away too young probably as a result of a lifestyle that was not too healthy and grief.

Inspired by the work of Howard Terpning. I started to create this work in Corel PhotoPaint, but switched to Affinity Photo after PhotoPain(t) began to crash constantly and was no longer able to export the digital painting to a .png file.

Inspired by the work of the great Howard Terpning. I found a reference image on the Internet that appealed to me and only later found out that it merely was a cropped part of the painting. As always I added my own details to the painting. 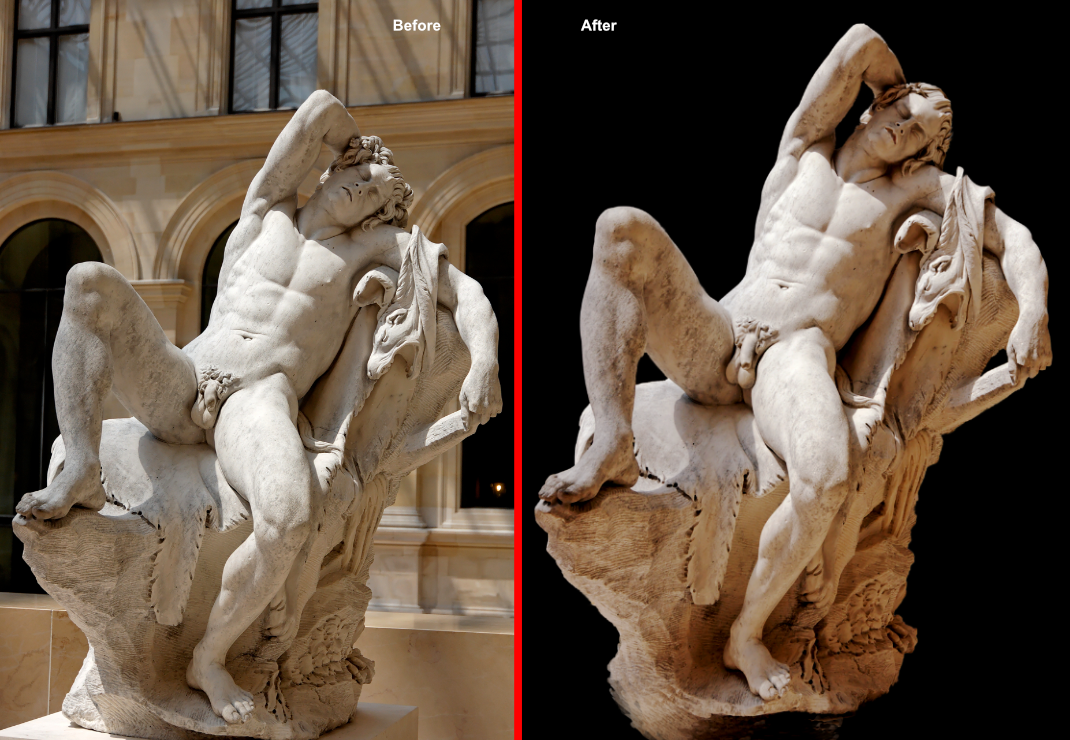 The statue of a sleeping faun by Barberini Before and After image, edited in Affinity Photo. Chiseling such exposing works didn't bother artists from the Hellenistic and Roman eras, nor their audiences, but today the world seems to be heading towards an other priggish Victorian age, in which public opinion is heavily restricted by ruling class clowns that are themselves perverted beyond the officially accepted meaning of the word, causing the braindead and obedient to do whatever they are being told without thinking for themselves. 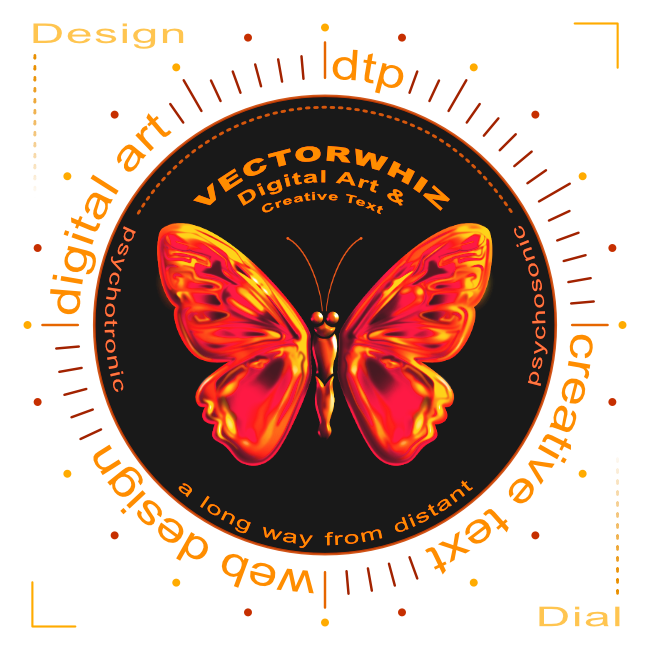